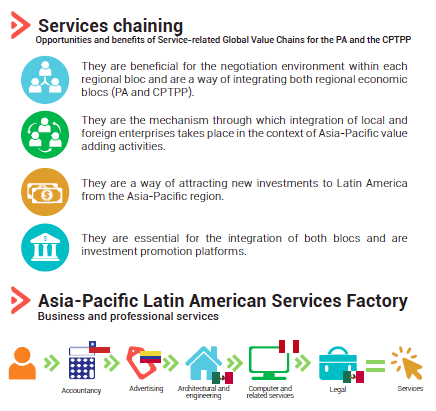 This initiative (The Services Factory) becomes an opportunity for achieving the objective in the Framework Agreement of the PA of being a mechanism for permanent political dialogue and economic projection towards the Asia Pacific region. The Services Factory could position itself as a means to integrate the PA members and become the single provider for services to Asian countries interested in the PA markets.

The integration bloc has progressed significantly with the Business Council of the PA. This Council is comprised of the most representative businesses and trade unions of the four members. This is a self-driven initiative from the business sectors to organise themselves for promoting the PA.

I firmly believe this forum could become an important setting to adopt the aforementioned services schemes to foster economic relations with third markets, especially the Asia-Pacific Region.

According to the rules provided in these agreements, what would be the various “modes” for commercial presence that would allow foreign direct investment in Latin America?

I found in the research that the Commercial Protocol of the PA and the CPTPP understood cross border trade of services or cross border supply of services in the same way. This approach meant that only three of the four modes incorporated in the General Agreement for Trade in Services (GATS) — cross border trade, consumption abroad and the presence of natural persons will be covered — in these PTAs. Thus, I questioned whether mode three — commercial presence —was not covered by these agreements at all— AP and the CPTPP. I responded to this query by looking into the investment chapters provided in these two PTAs. The investment chapters incorporated under the definitions the concept of “investment”, referring to the several ways an investment in a state party can occur. Therefore, mode three — commercial presence — was covered as one of the forms of FDI.

As I put forward in this research, this supply mode could occur in several ways allowed for in both agreements. One example of these avenues for FDI includes when an investor of a state party in either the AP or the CPTPP opens representation offices by leasing commercial buildings or commercial premises. Other avenues for FDI occur by incorporating a legal entity such as a trading corporation, subsidiaries, branch offices, or agencies in the territory of another state party.

Finally, I concluded that even though the PA and the CPTPP did not incorporate provisions referring expressly to mode 3 of services supply within their chapters on cross border trade in services in the way GATS does, these PTAs included these provisions in the investment chapters through several avenues.

What did you conclude regarding the scope and degree of convergence between the relevant rules on services and investment in the Pacific Alliance Agreements and the CP-TPP?

My starting points were the rules and disciplines established in the investment chapters of the PA and the CPTPP. I inquired on whether these legal regimes worked harmonically in offering the state parties and investors standard normative frameworks and similar legal structures that would attract investments and productive linkages of services with the Asia-Pacific Region.

I found that both chapters incorporated the latest and most up-to-date international standards on investments, such as the principle of the sovereign right for host states to regulate specific areas to pursue legitimate public policy’s objectives.

Although I found differences between both legal texts, these differences were not substantive; they were connected to particular drafting styles and did not impact the underscoring principle or subject matter covered in each provision. These divergences did not change the substance of the rules and disciplines on investment. These variations could be considered additional contributions when planning a single legal framework on investment for the PA and the CPTPP.

Finally, I argued that a converging legal framework in the future would aid the goal to attract larger flows of investments from the Asia-Pacific region to Latin America through the several avenues available for FDI that I examined in this research.

If you are interested to know more about Mr Toro-Fernandez’s work about investments and services trade in the Pacific Alliance, please visit our online library featuring several of his academic and opinion pieces about this topic.

You may also reach out to Mr Toro-Fernandez at jtorofer@eafit.edu.co

Mr Toro-Fernandez views in this Blog are personal and do not reflect the policies and views of the institutions he is affiliated with.

The Pacific Alliance: Perspectives and Opportunities for Latin America