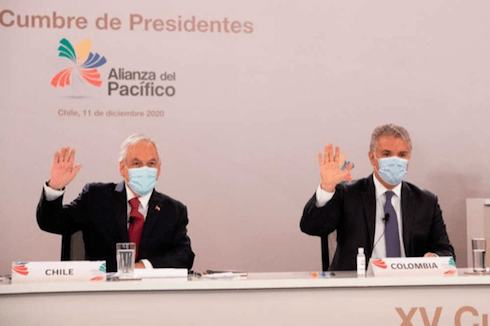 The second type of measures referred to giving a COVID-19 dimension to existing initiatives targeting the use of economic resources. For instance, the Cooperation Fund prioritised using its 2020 resources to invest in projects to respond to the COVID crisis. In this context, one of the projects approved was a promotion plan to rebound the tourism sector strongly affected by the governmental measures to stop spreading the disease. Another initiative worth mentioning was the funding of eight innovation projects to mitigate the COVID effects. A great initiative despite the limited number of projects that received resources in the form of seed capital, prototyping and IP support, and mentorships  — two per PA member. Regarding, productive linkages, the members identify a list of 58 products, inputs and final products with potential for intra-regional productive linkages. These are products that contribute to responding to the sanitary emergency or help in economic recovery.

The third type of measures circumscribed to ensure that planned activities could still go ahead through the use of digital technologies that waived people’s physical movement. For instance in the area of trade promotion efforts seem to be limited to maintain and host business round tables among exporters of the region with prospective buyers in the United Kingdom, Central America and Asia through the digital format. Moving forward, it would be worth exploring the effectiveness of this new format in term of the number of meetings and amount of the transactions vis a vis a physical format of rounds. Enabling both options in the future could make it possible for more SMEs and female entrepreneurs to participate and benefit from these rounds.

Overall, the so-called COVID-19 Action Plan although modest in scope managed to maintain efforts in constructing a PA region considering the limited resources devoted to it, the political turmoil that Peru faced and prioritisation of national responses to the crisis. In this context, the regional response became residual.

The leadership through the Pro-Tempore Presidency is in the hands of Colombia for the forthcoming year. This member will have the task to implement an agenda where regional trade and investment could boost economic recovery. Colombia needs to maintain the digital move momentum in the PA and follow-up on the already identified sectors, inputs and products for regional productive linkages. These efforts include the implementation of the Road Map towards a regional digital market. The promotion of productive linkages requires follow-up on mapping inputs and products with pilot projects for COVID-related products and other items identified with Japan, Korea, China, and Thailand.

The PA will need to show that it can actually align with the global trend towards strengthening regionalism. A trend that the COVID crisis accentuated for consolidated regions such as the European Union after the initial shocks. The results of the PA on this front have been modest. They show that, despite efforts, individual members continue to rely on other traditional partners to ensure resilience in times of crisis.